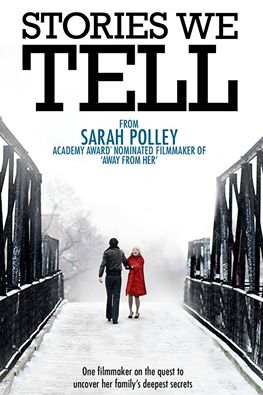 February 17, 2016. 5/52 STORIES WE TELL. This week’s film from a female director was a documentary by Sarah Polley. Sarah directed the exquisite AWAY FROM HER (if you haven’t seen this film, it’s an absolute must) and is a great actress as well. I’m sometimes completely overwhelmed by Polley’s genius and talent when I watch her work. She cuts to the heart of a matter with such keen perception that it makes me wonder why no one ever found a way to say it like that before. Her documentary tells the story of a family secret and it’s so subtle and unassuming that it completely sneaks up on you. Not only does she surprise us with the story itself but she surprises with the form she uses to tell the story. Aside from being a wonderfully absorbing, moving and entertaining doc, I was also struck by something else. One man in the film argues passionately that this story is only his to tell and should be told the way he wants, from his point-of-view. Polley asserts, both verbally and through her film, that everyone involved in the story owns a piece of it and is entitled to speak from their own point-of-view. I found this to be a profoundly feminine approach to storytelling. It wasn’t HER story or HIS story, but all of theirs. And all of ours as well.